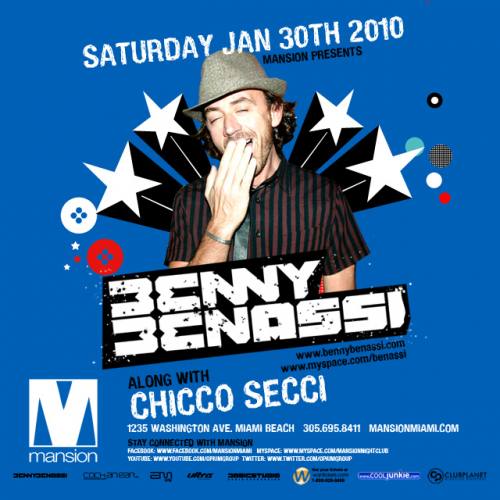 What: Benny Benassi at Mansion

The fashionable, fun, and sometimes freaky sound of DJ/producer Benny Benassi first hit the dancefloor in 2001 with the single I Feel So Fine. Released under the name KMC, the track first stormed the charts in Benassi's native Italy, but soon became a number one hit in the U.K. The electro-meets-house "Satisfaction" took Benassi's success worldwide a year later with high-profile DJs like Carl Cox, Darren Emerson, and Roger Sanchez singing its praises. Remixes for OutKast, Goldfrapp, and Felix da Housecat followed, and Benny soon formed the Benassi Bros. with his cousin Alle Benassi. Released in September of 2003, the campy and quirky Hypnotica was Benassi's solo debut, and a year later Pumphonia marked the Benassi Bros.' first full-length. Benassi often works with vocalists Paul French and Violeta, who are collectively known as the Biz. At the end of 2004, he won the European Border Breakers Award for Hypnotica, which racked up the most sales for an Italian album outside of Italy. Join us January for the much awaited return of Benny Benassi to Mansion Nightclub on Miami Beach.