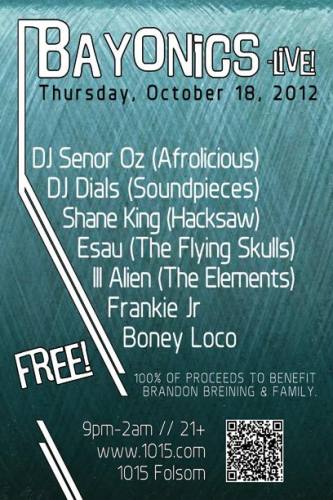 
100% of proceeds will go to Beats for Brandon


Bayonics are an 11-piece powerhouse from San Francisco’s Mission District that defines today’s Bay Area experience, fusing the musical genres of hip-hop, Latin music, funk and reggae with elements of rock and jazz. They have been described as a fresh, hip-hop influenced revival of legendary groups like War and Santana, continuously expanding and melding genres to match the evolving cultural landscape.


In September of 2011, Bayonics released their highly anticipated second album, Mission Statement. The album was produced by the Rondo Brothers, whose past projects and collaborations include acts such as Dan the Automator, Handsome Boy Modeling School and Deltron 3030.


The band has been featured on the cover of the San Francisco Chronicle’s Datebook section and is widely recognized as one of the top live acts in the Bay Area. They held the #1 spot on the

Reverb Nation Latin charts for San Francisco through 2010 and 2011. In August of 2011 they were awarded the San Francisco Bay Guardian Editor’s Pick for “Best of the Bay – Best Frisco Fusion.”


San Francisco based DJ Señor Oz has been rocking dancefloors from cities like Rio de Janeiro to New York City to festivals like Burning Man. His eclectic selections mix up dance music from genres ranging from funk, Afrobeat, disco, house, Latin, Hip-Hop and reggae, the unifying factor being the breaks that make the party move.


As a tastemaker, producer and promoter he has helped garner worldwide respect for the Afrolicious party he co-founded has gained critical praise for his mixtapes and original production and remixes that have come out on Six Degrees Records and Akwaaba Records.