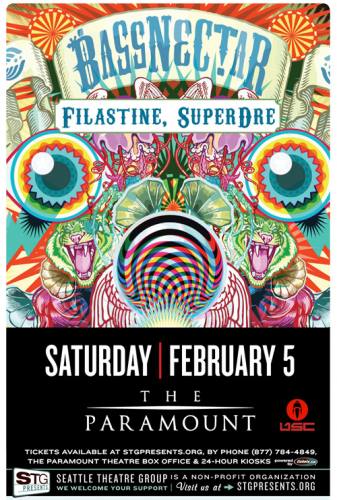 By combining sound and force with weight, the Bassnectar experience engulfs the senses. It is as physical as it is auditory; the adventure has no rules, no limitations, and no hesitation in fusing the familiar with the strange or the classic with the cutting edge.

Bassnectar is the brainchild of Lorin Ashton, and it exists as an open-sourced musical project that is as diverse as it is heavy, as raw as it is meticulous, and as fierce as it is imaginary. Spanning the spectrum of sonic style, the music covers every genre imaginable and smashes it all into a synthesis of intense, wobbling basslines and hypnotic soundscapes.

Whether remixing, collaborating, writing, DJing, performing live, or working on constant social networking, Bassnectar’s music is the lure and social impact is the sincere intention. According to Ashton, “We are so blessed, and so deeply fortunate to be alive and awake right now…it’s a basic truth, but it’s very powerful. I think privilege confers responsibility, and Bassnectar is a reflection of that opportunity to give back; the motion of my cells bouncing back at the world.”

The official Bassnectar discography can be found at http://www.bassnectar.net/listen/

Through his self-run Amorphous Music label and Bassnectar Labs studio, he has remixed/collaborated with the likes of KRS-One, Perry Farrel, Fever Ray, Spearhead, STS9, Buckethead, Tappa Zuki, and Zumbi of Zion I; as well as various remix projects with producers such as Z-trip, Diplo, BT, 6Blocc, DJ Vadim, and RJD2.

Along the way, the Bassnectar tour has headlined stops at some of the most noted venues in the country. After a long line of sell-out shows, Bassnectar never fails to gather monster crowds on the festival circuit. Some of his most celebrated sets took place at the nation’s top festivals including Coachella, Lollapalooza, ACL, Bonnaroo, and Ultra Music Festival.

Whether performing at an intimate club or at a major festival, Bassnectar energizes audiences with an experience unlike any other.