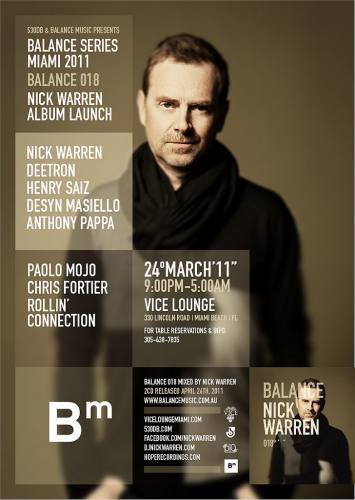 To celebrate the release of Nick Warren's Balance: 018 compilation, 530db and Balance Music are joining forces to host a one off event that involves artists from the mix series' past, present and future.

The newly opened Vice Lounge possesses an ambiance of regal stature. Its concept was derived from 19th Century German Royalty, Music Romanticism, art & artist appreciation and tribute to mysticism concepts. The correlation of these concepts creates an intriguing allure of beauty and mystery. Its dark interior lights up with wonder, thanks to LED lightshows and the multitude of oversized flat screen TVs placed throughout the venue.

The Balance Series is renowned for being one of the most consistent and trusted compilation series on offer, with each new installment being eagerly awaited and heavily hyped, before and after it’s arrival.

Following on from Timo Maas’ 2 disc Balance 017 mix, which was released last October, is Nick Warren, stepping in for the 18th edition of this lauded series. Nick is somewhat of a legend in the Dj world and his solo productions along with those of his collaborative project Way Out West are of an increasingly high standard and testament to his passion and experience.

Warren has taken a ‘less is more’ approach with this 2 disc compilation, molding his long-time love of melodic and progressive sounds with his new-found ‘imaginative techno’ affair. “This album treads a techier and deeper path while sticking to my template of sourcing music from every corner of the globe, once more finding some new and exciting producers” he explains.

Rather then the tracklist reading like a who’s who’s and what’s hot, Nick’s musical maturity shines through and hopefully you’ll be left inspired, educated and fulfilled, which is how most other Balance mixes leave you feeling.