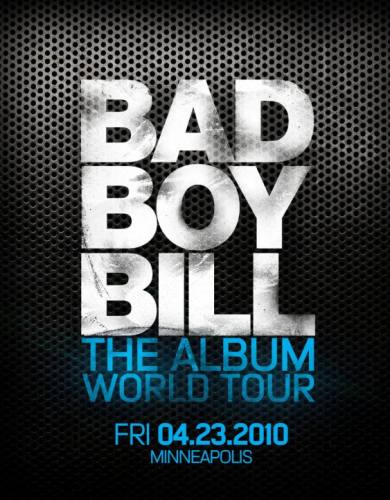 On Friday, April 23th Sound In Motion presents...
Bad Boy Bill
To call Bad Boy Bill accomplished would be a bit of an understatement. Voted America's Favorite DJ by BPM Magazine. Winner of URB's Massy Poll. Co-founder of Beatport.com, the leader in electronic dance music downloads. That might be enough success for some, but not for this world-renowned DJ. With over two decades of DJing under his belt, Bad Boy Bill is ready to release his first full-length artist album!
With a http://www.twincitiesnightclubs.com/ 2010 dj award winners showcase featuring:
Jack Trash - Electronic DJ of the Year - http://www.simshows.com/jack-trash
Tyler Hampton - TCNC DJ of the Year - http://www.simshows.com/tyler-hampton
D33P KUT5 (aka EJ Tha DJ) - Crossover DJ of the Year - http://www.myspace.com/djejthadj
Friday, April 23th
Epic Event Center
110 North 5th Street
Minneapolis, MN
http://www.epicmpls.com/
18+ to enter, 21+ to drink
Doors @ 10 PM
Bottle service: 612-327-2897
Tickets available at:
http://www.vitalculture.com/
http://www.clubtix.net/
http://www.badboybill.com/
http://www.nettwerk.com/
http://www.menagemusic.com/
http://www.beatport.com/
http://www.simshows.com/
http://www.twitter.com/simshows
http://www.facebook.com/simshows
Who is Bad Boy Bill?
Now an international house icon, Bad Boy Bill got his start as a teenager, DJing at local parties, entering DJ battles, and throwing his own events. He won the first DJ battle he entered. As a senior in high school, Bill started his own record label (International House Records) and signed tracks from DJ Pierre, Mr. Lee, and others. Between 1995 and 2001, Bill released five volumes of the "Bangin' The Box" series on his own label, Mix Connection Multimedia. It became one of the best selling series in dance music history. During that time, Bill also founded Moody Recordings, which released the international hit "Get Down" by Paul Johnson.
In 2003, Bill shook things up with Behind the Decks, a full length Mix CD + Mix DVD containing visuals from his live show. Bill took it to another level in 2006 with his follow up project, Behind the Decks Live, which captured the live show that has made Bill a favorite in a full length DVD and Mix CD.
In 2009, Bill surprised longtime fans and attract droves of new ones with his first full-length artist album, titled "The Album". This was introduced by the first single, "Falling Anthem." The mid-tempo dance track is propelled by a sparse and steady driving beat, but the real focus is on the gorgeous, plaintive vocals from Alyssa Palmer. Hear this track and all the rest on "The Album" at Beatport.com!