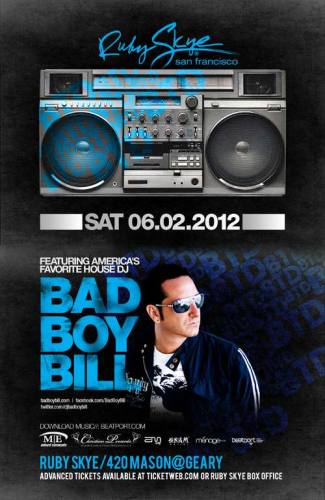 So goes one of the legendary chants of Chicago house icon Bad Boy Bill, who began name checking when he first started out on the radio to distinguish himself from the other DJs on the airwaves. Bill has come a long way from his days as a radio mix show DJ. On his belt hang the titles of DJ, Artist, Producer, Songwriter, and Entrepreneur. Not to mention three-time DMC FINALIST, 1998 Winter Music Conference MIXSHOW DJ OF THE YEAR, 1999 URB Magazine 2nd Place DJ OF THE YEAR, and this year’s #1 FAVORITE DJ according to BPM Magazine. And now, after the success of the Bangin’ In The Box series, Bill is upping the ante to deliver Behind the Decks, a new mix CD and DVD, on System Recordings.

Hailed by DJ Magazine as “One of America’s most popular and influential DJs,” the renowned artist didn’t grow up dreaming of making music – in his youth, he thought he would perhaps pursue a career as a professional baseball player. But in high school, after joining a DJ crew with some of his neighborhood friends, Bill entered the world of DJ battles and party promotion. My DJ style originated with the idea to remix a song live with two copies of the same record and then combine scratching and hip-hop techniques with house grooves. At only 16, his friend Julian “Jumpin” Perez, who deemed Bill “the dopest white kid he’d ever seen,” stood Bill before prominent radio jockey Farley Jackmaster Funk at WGCI, and he began scratching and mixing the eight records he’d been practicing on for hours every day. Farley was so impressed he recruited Bill right then and there. After WGCI, Bill found himself on the airwaves again on Chicago’s B96, and eventually broadened his skills, making his own tracks and starting his own record label while still a senior in high school. Nowadays, Bill averages over 150 DJ gigs annually, playing everywhere from New York, Chicago, and Los Angeles to international hotspots including Peru, Colombia, Germany, England, and Spain.

Coming from a broad musical and cultural background, Bill cites numerous personal influences. “My grandfather was an opera singer so he was always into music, and was very supportive,” he says. “My dad took me downtown to buy my first set of 1200s – I will always thank him for that.” Additionally influenced by the likes of motivational speaker Anthony Robbins and Chicago mix show DJs ‘The Hot Mix 5’, Bill notes, “Everything I hear affects every song I choose to play and the way I play it.”

And his inspiration? Spinning the crowd into a dancing frenzy with his lighting-quick mixes (often playing up to 20 records in the time the average DJ would mix in 5). The payoff for me is seeing people dancing and having a great time during my set, he explains. And of course, another source of inspiration: the ladies (Bill was named the “Wilt Chamberlain of Techno” by Lotus Magazine).