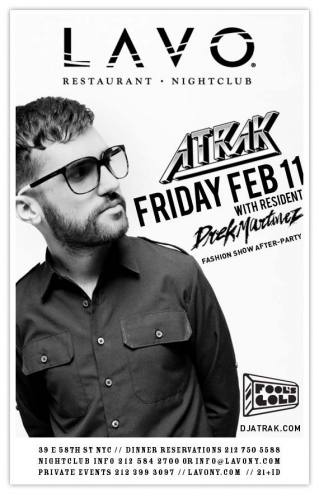 
A-Trak began his career at age 15 when he won the 1997 DMC World Championships. In 2004, he was hand-picked by Kanye West himself to be his tour DJ. Then in 2007, A-Trak co-founded Fool’s Gold Records, which now releases some of the hottest current music from artists like Kid Cudi, LA Riots and Laidback Luke and many more. A-Trak’s signature remixes for the likes of Boys Noize and Simian Mobile Disco, original tracks like “Say Whoa,” and mixes like ‘Dirty South Dance 2,’ as well as gigs at major festivals around the world, have established him as a dance music master. He most recently he made his mark on the pop world through his Duck Sauce collaboration with Armand Van Helden, releasing bona fide hits "aNYway" and “Barbra Streisand,” which is nominated for 'Best Underground Dance Track' and 'Best House/Garage Track' in this year’s International Dance Music Awards.