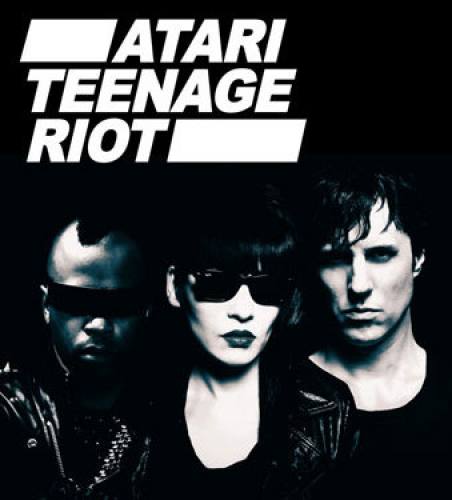 In the late 90s Atari Teenage Riot (ATR) emerged out of the electronica genre, to subvert all rules of rock and techno music. The original conception was Alec Empire's and when joined by Hanin Elias, Nic Endo and Carl Crack on stage, the mixed race, mixed sex image of the band provoked people before they even heard the music.

The seminal band was too radical in its views and statements and simply too loud and noisy to fit in neatly inside any genre, with Hanin screaming about police violence and revolution, ATR opened many doors for female artists to follow at the time.

In 1996, Alec Empire teamed up with the Beastie Boys to negotiate a label deal between Grand Royal and Digital Hardcore Recordings for North America. The album, "Burn Berlin Burn" was born.

Shortly after, tours with Rage Against The Machine, Wu-Tang Clan and Beck swiftly followed. But with the success came tension. Every musician has their own way of dealing with it, and ATR were extremely intense. Very soon the thin line between reality and paranoia started to vanish.

When John Peel asked ATR to play Queen Elizabeth Hall in London in 1999, the band had just released their 3rd and best album, "60 Second Wipe Out", which was mixed with Andy Wallace (Nirvana's "Nevermind", Slayer). During the song "Revolution Action", kids stormed the stage and pandemonium descended on the capital.

When the Berlin quartet played their last show at the Big Day Out Festival, Australia in 2000 everyone was watching: The Red Hot Chili Peppers, Nine Inch Nails, The Clash's Joe Strummer, Foo Fighters and Primal Scream on the side of the stage. The band finally dissolved in the wake of MC Carl Crack's death just days before September 11th 2001.

Their records stand as a testament to the years 1992-2000, where anything seemed possible.

The members of Atari Teenage Riot are pleased to announce that the American MC CX KIDTRONIK has officially joined the band and will be completing their line up when they hit the UK later this year. Having previously worked with Saul Williams, Kanye West and Nine Inch Nails, CX KIDTRONIK is an unstoppable and explosive MC as politically minded as the rest of ATR that bring his own element to the band.