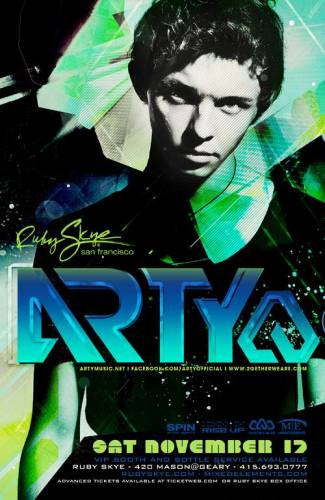 Hitting all the right notes with fans and peers alike, Russian sensation ARTY is the darling of the EDM world. An emerging titan in the studio and simply electrifying in the booth, support comes from all possible corners – Armin Van Buuren, Skrillex, Avicii, Tiesto, Above & Beyond, Axwell, SHM, Dirty South, Porter Robinson and more join the plethora of press touting ARTY as one of the biggest rising stars of recent years.

From broadcasting behemoths MTV and Sirius XM and music bible Rolling Stone through to influential tastemakers Dancing Astronaut and beyond, watch ARTY build on this in 2012 as he continues to forge his path and takes his place amongst the dance music elite.

The gifted youngster first lit up airwaves and dance floors back in 2009 with tracks such as ‘Gentle Touch’, ‘Get On’ and ‘Flip Flop’. Quickly snapped up by the legendary Anjunabeats imprint, his relationship with the team behind Above & Beyond has only gone from strength to strength over the last three years. Explosive anthems have proved to be the norm for Arty; ‘Kate’, ‘Around The World’, the Axtone-signed ‘Trio’ and the explosive Mat Zo collaboration ‘Mozart’ being the mere tip of a rapidly expanding musical iceberg. Consistently featured in the sets of the world’s biggest artists and on its most far-reaching radio stations, it came as no surprise then that 2011’s DJ Mag Top 100 DJ Poll saw ARTY soar a staggering 50 places to claim the #25 spot.

It’s not just his continual onslaught of production work that sealed the deal for the army of ARTY fans who put their money where their mouth is and delivered votes in their droves. Whether it’s deep in the darkened, thundering bosom of clubland or in front of tens of thousands on the laser-lit stages of Ultra Music Festival, Identity Festival, Electric Zoo Festival, Fallout Festival, Electric Daisy Carnival and more, his spell-binding sets have cemented his status as one of the most sought after artists anywhere. From the US and Canada through to South America, across the seas to the shores of Europe, Asia and beyond to Australia, this hot talent has grabbed the attention of both the new EDM generation and those more seasoned veterans of the dance arena. The chant seized on by fans says it all; there is “no party without ARTY”.

And the success continues across the board. In June 2012, ARTY announced the beginning of a new partnership with Stateside radio giant Sirius XM. Joining the elite ranks of DJs to have hosted exclusive shows on the network, ARTY’s ‘Together We Are’ will beam directly into the ears of a waiting America. ‘Open Space’, released on Anjunabeats in June, scored huge radio play and an overwhelming tidal wave of support from the likes of David Guetta, Axwell, Armin Van Buuren, Tiesto, Hardwell, Thomas Gold, Gareth Emery, Ferry Corsten, Kaskade, Max Vangeli and more. As ARTY’s profile continues to grow, as more and more tune in to his sound, the only question is how far and how high this young talented artist can go.