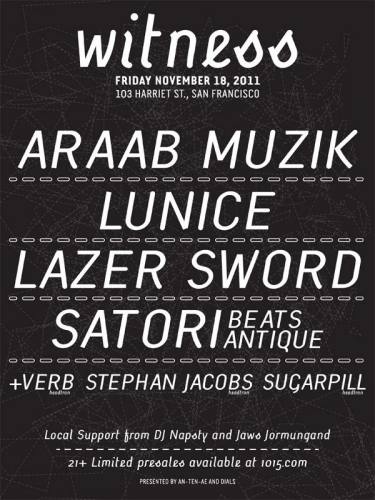 Antaeus Roy and Bryant Rutledge made a name for themselves on their vivid live shows and bass-heavy bootlegs, before releasing the six-track Golden Handshake EP on Numbers earlier this year. Their music, which is rooted in rap but also takes in 8-bit, Daft Punk, Jimmy Edgar and more, has been described as everything from “electro crunk” to “future blap”, but we’d rather just consider it a modern, wide-reaching take on hip-hop.

David Satori was born in Burlington, VT, on June 6, 1979. He started playing guitar at the age of 12 after hearing his brother Michael pick up the instrument. At 17 he was playing with an experimental high-school garage band called Bubble Tribe while attending Burlington High School. His brother Mike played bass, he took up drums, and the lead instrument was an electric banjo played by a neighborhood virtuoso who was interested in exploring the odder sounds the instrument could make. When he was older, he picked up his grandfather’s violin to learn Gypsy fiddle music as well as Indian and Middle Eastern styles. He discovered a connection between the music of North Africa and Mali, which fed his curiosity for world music.

In 2007, Satori was in L.A. again dating belly dancer Zoë Jakes. She introduced him to Miles Copeland, her boss at the Bellydance Superstars show. Satori produced the music for an instructional belly dance DVD by Rachel Brice. Copeland was impressed and asked about an album of modern belly dance music. Satori suggested a fusion of electronic experimental music and traditional belly dance tunes. Copeland gave him the green light and Beats Antique decamped to a recording studio to produce their first album, Tribal Derivations. The rest is history…

Lunice Fermin Pierre II has taken over the asylum because his sound is crazy, his vibe is inconceivable, and his appeal boundless.In a little over a year, Lunice had managed to capture the attention of the world, with an eclectic sound and out of the ordinary production capability. Lunice is a natural born entertainer who has the drive, sound, and dexterity to make us move.

He was able to get a firm grip of the electronic beats scene across Canada and the United States with his live mixing of beats, bass, and splintered electronica. While taking cues from Autechre, Bangladesh, Dilla, and the Ed Banger clique, Lunice managed to craft his own recipe which makes dance floors bump and bass bins thump. This 23 year old producer has put out remixes out on prominent labels such as Mad Decent, XL Recordings, Young Turks, Big Dada, Top Billin’ and a recent solo EP entitled STACKER UPPER which was released on the Scottish Based label LuckyMe. The discography continues to grow by the day.