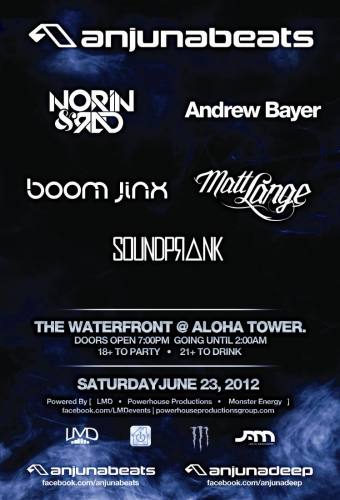 
The Waterfront at Aloha Tower Marketplace


Ontario native Colin Fisher, better known by his artist name, Soundprank, has seen meteoric success in the past two years in the genre of progressive house. Trained from a young age in classical piano and jazz drums, Soundprank's productions frequently feature a sense of instrumental realism and melodic complexity. Best known for tracks such as The Far Side and Beginnings, Fisher's productions provide a breath of fresh air in an industry moving towards more commercial and accessible electronic music.


Despite having only been producing for three years, his initial interest in electronic synthesis and sequencer programs combined with his classical training sparked the desire to create highly melodic and more recently, driving progressive music. Aiming to compose music that evokes a sense of excitement reminiscent of old school electronic music combined with the balanced, lush and atmospheric sounds more prominent in modern EDM, the originality of Soundprank's music is undeniable. His innovative take on retro-futurist sounds has charted him numerous times on Beatport's Progressive House Top 100 and much of his discography has been released on Anjunadeep, including multiple features on Anjunabeats 03 and 04 compilations.


Fisher's music has been featured extensively on Above & Beyond's Trance Around the World and he has hosted Anjunabeats Worldwide multiple times on top of receiving massive support from the likes of Marcus Schossow, Myon and Shane 54, Jaytech and Tiesto, who featured none other than his very first release –Sand- as well as Khomha's remix of his collaboration with Dezza, Signals, on Tiesto's Club Life. Further projects include work with Jaytech on the progressive gem Pranktech, a number of collaborations with Boom Jinx (including Pieces Of The Puzzle, released on Anjunadeep) and some very noteworthy remixes.  Despite Fisher’s rapid rise to the top of the progressive music scene, there is still much more to be seen from this young and very talented artist.


Hailed as the "Breakthrough DJs/Producers of 2011" by Above & Beyond, Bruce Karlsson and Nick Sember have hit the ground running. Better known in the EDM scene as Norin & Rad, these two Southern California boys are really showing the world their unique take on trance.


Their collaboration with Thomas Cresine aka Recurve titled "The Gift" pushed them right into the spot light. Being only the second release on Tritonal's Air Up There Recordings the track came in at #2 on the Beatport trance chart. It was even played on Armin Van Buurens massive ASOT 500 show by Armin himself among others. They immediately followed with remixes for world famous record labels such as Anjunabeats, Enhanced Music and Armada. One of their follow ups, a remix for Estiva's track "Better Days" featuring Josie, was also played at Global Gathering 2011 by Above & Beyond. Coming hot in 2012 and already doing damage to the dance floors. Norin & Rad’s “Bloom” takes its debut on Trance Around The World 400 hosted by Above & Beyond themselves.


As for their DJ sets, they've rocked the stage along side the biggest names in EDM today such as Markus Schulz, Super8 & Tab, Cosmic Gate, Andy Moor, Mat Zo and the list goes on. Their first festival debut for Insomniac Events was no different. The boys really showcased their live skills as they went on for a dominating 4 hours leaving no time to rest the entire set.


Theres no telling where this talent will go but we can be sure of one thing, Norin & Rad are here to stay.


In only a short period of time, Matt Lange has become a name synonymous with attention to detail, precision, and musical craftsmanship. Mattʼs musical pedigree veers strongly from the typical path of the modern electronic musician; from singing in a boys’ choir to later playing lead guitar in a metal band, his tastes and and versatility are as varied as they are numerous. Matt graduated from Bostonʼs Berklee College of Music with a degree in Music Synthesis, partnered with a thesis that pushed the boundaries of both 5.1 surround sound and modern sound design. This proved to be enough to cater to the ears of dance music legend BT; enough so to choose him to co-program and engineer the critically acclaimed and Grammy nominated ʻThese Hopeful Machinesʼ.


His works have been supported by industry ﬁgureheads in the dance music industry, ranging from the likes of Sasha to Above & Beyond to Nick Warren and more, as well as appearing on such prominent labels such as Anjunadeep, Armada Music, Black Hole Recordings, and many others. In past year Matt has appeared on numerous compilations as well, most notably In Search Of Sunrise 8, Anjunadeep 03, and Mayday 2011.


In additional to his production talents, his dj sets are equally praised for their musicality, diversity and depth. Artists as varied as Above and Beyond to Glenn Morrison, to Drum and Bass legend TeeBee are all in constant support of Matt’s sets.


2011 marked another milestone in Matt’s career when he launched his new label, isoRhythm. Exclusively an output for Matt and a few hand picked artists, isoRhythm promises to bring some of the most forward thinking electronic music and sound design the world has yet to see.


Hailing from Norway, Boom Jinx began writing music in 1989. After building a successful career in the commercial film/TV industry, he turned his attention to dance music in 2005, spending his off-hours exploring his new passion. Deftly managing his time, continued career success came with writing music for the 5th biggest videogame franchise "Need for Speed" and one of the most popular TV shows in the world, "CSI: Miami." His work on dance music has been equally lauded, developing a well deserved reputation amongst his peers for productions that showcase a stunning level of intricate detail and subtle nuances.


His music has gotten support from industry heavyweights such as Armin Van Buuren, Tiësto, Paul Van Dyk and Ferry Corsten as well as rave reviews from DJ Magazine and URB. Considering that his tracks have achieved top placement in European dance charts and gotten consistent play on worldwide radio shows (including numerous plays on BBC's Radio 1), it is clear that his music resonates with the masses as well. This rapport has led him to become a DJ with performances in Europe, America, Asia and Africa, sharing event billing with the likes of Above & Beyond, Gareth Emery, Markus Schulz and Sander Van Doorn. With an epic 14-city USA tour opening for Above & Beyond under his belt and his highly anticipated album nearing completion, Boom Jinx is set to explode on the global DJ scene.


Musical genius is a phrase so often overused but in Andrew Bayer's case its use is justified. Having previously produced with legends such as BT and Above & Beyond, the Washington-raised producer is one of the most prolific and eclectic producer in today's scene - with 6 of his productions featuring on the recent Anjunadeep 04 compilation, and recent EPs and singles covering everything from deep house to downtempo electronica, progressive to deep trance. A perfect snapshot of his eclectic experimentation, his debut album "It's Artificial" was released last summer and described by Mixmag as "an incredible album of sophisticated electronica", with a second entirely downtempo album planned for fall 2012. Destined for huge things, his live set has already wowed at Above & Beyond's 5,000-strong Group Therapy Miami event during WMC - causing a frenzy of excitement amongst both the Anjuna fanbase and those who listened to the live broadcast.


The Waterfront at Aloha Tower Marketplace