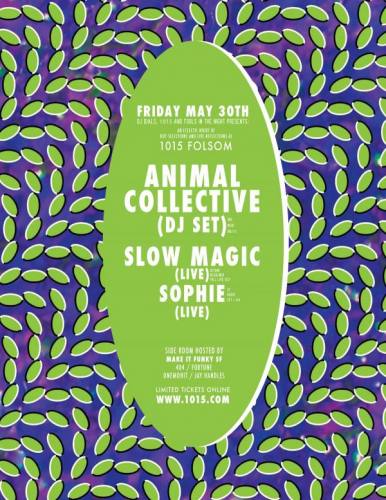 
Side room hosted by Make it Funky SF

Animal Collective are a group of four best friends who grew up playing and recording music together in Baltimore County Maryland.

Because it's the only word we could think of that made any remote connection to what we thought our sound was, and, of course, we love our fellow animals very much.

Because we have always wanted to be the ones who define what and who AC are. Two people? Four people? Why not?

Don't be surprised if you come to see us and it's not what you thought it would be, and try not to get too upset. AC continues to make music after seven years, six studio records and one live record, that combines a love of sonic free form electronic horror gospel hip hop soul pop madness and brings it all together into something that is (hopefully) at times totally pleasing and at others completely scary and confusing but most importantly is refreshing in this crazy, crazy world.


Slow Magic is the sound made by an unknown imaginary friend.

Making music while staying anonymous in the Internet age isn't only difficult, it's fun. Slow Magic comprised of an "unknown imaginary friend" bubbled up from nowhere with an incredibly delicious single, "Sorry Safari". The glo-fi outfit whispered into the conversation like a mysterious woman at a cocktail party— who is that stranger? That hair, that dress! Who's she here with? You ask the host, but they don't have any idea, and everyone seems too shy to go up and speak to her. And so you're content with just gazing quickly, taking sly looks while nuzzling your cocktail nonchalantly, tapping your foot to the beat. This new dreamy video for the lead single from their debut EP was directed by Brendan Canty, the man behind Feel Good Lost based in Cork, Ireland.

It's not every day that you hear music that sounds totally and wholly new—that is, music that you've never heard anyone make quite like this before. And in the oftentimes retro-fixated arena of modern dance music, true uniqueness can be an even rarer find. And while the enigmatic London-based producer Sophie's aggressively bright style carries elements of other producers' hallmarks—the jagged melodic textures of Glasgow's Rustie and Hudson Mohawke, the airtight syncopation found in James Blake's early work, the lollipop synths of French Touch acts like Fred Falke and Alan Braxe—his work thus far transcends mere pastiche. It's fascinatingly strange stuff, and it's fun as hell to listen to, too.

The producer is currently taking the anonymous route, but it's seemingly not out of fear or shyness; rather than offering shadowy, face-obscuring press photos, Sophie—who is assumed to be male—takes the visual opportunity to bolster his colorful tracks with fizzing shots like the one above. "The music is not about where someone grew up, or what they look like against a wall," the producer writes in an email (he declined to speak on the phone for this piece). "Therefore, you should try to use every opportunity available to say what you're trying to say, instead of saying, 'Here's my music and this is what I look like.' Nobody cares."