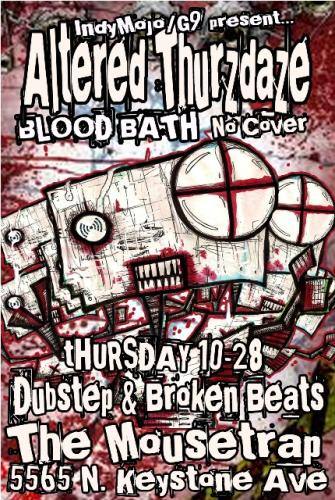 
Indymojo.com and G-9 Collective are very excited about this edition of Altered Thurzdaze...

Halloweek is upon us! Muahahahahahahahaha! Wear a costume and get a FREE ticket to Cyberoptix on Nov. 4th!

James Brooks and Ami Webb are tying the proverbial knot, and we're helping them celebrate with a heavy dose of bass and good vibes as they usher in a new chapter of their lives!

Scott, aka Dr Higgens, was a sponge-like child, pursuing the hows and whats of the world around him. Raised by a sea dog and a shutterbug, he was always encouraged to define the beat in his own heart. Adolescent Scott unexpectedly found his groove in a pair of headphones one otherwise negligible night out in Portland, and this beat has remained solid and true through his adventures in art school and a career defined by digital animation and design. Armed with a Masters Certificate in Music Production and Technology from Berklee School of Music, Scott has recently returned to the great green Northwest after several years in Southern California, now having the pleasure of calling Seattle his home.

James B can be named among one of the most versatile DJ's in Indy. Breaks, trance, progressive, or house…you name it James B will be sure to please! He is a seasoned veteran, who has been moving the dance floors since 2001. You will occasionally see him sharing the wheels-of-steel as one member of the group Just 3 White Guys…3 DJ’s that use 4-6 turntables, 2-3 mixers, multi genre music, fantastic turntablism along with occasional electric guitar samples and solos.

Whether James B is seen displaying his skills and mixing sounds alone or with Just 3 White Guys…It is not to be missed. One question that is usually asked before he plays his solo sets: "Will it be breaks or trance?" James B always replies with: "I don't know…Let's just see what happens! Enjoy!"

After emerging from the comet that brought him to earth Gizzmo found a pair of turntables. Little did the people of Earth know that their world had changed. From that point on he proceeded to tackle any form of decent electronic music (i.e. NO TRANCE) and perfect the mixing of it. He can be found anywhere there are Subarus racing or Beats bumping. DO NOT get him wet and DO NOT feed him after midnight. We also don't suggest making eye to eye contact with him while he's playing as the energy coming from his brain may reduce you to a pile of dust.

With nearly 10 years of DJ experience, Kodama’s musical preference has touched all spectrums of electronic music. Performing under a life-long nickname, Kodama embodies the exuberant and jovial tendencies of the mythical tree spirits he shares a title with. These characteristics, paired with a healthy dabbling in many sub-genres of electronic music, come together to produce an invigorating symphony of sound.

*** Please help spread the word by telling/inviting your friends ***