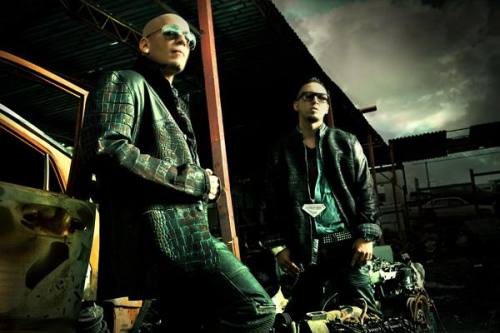 
After the success of “Down To Earth”, the album that went gold for them in 2010, Alexis y Fido remain continuously loyal to their fans, aggressive and authoritative in their lyrical delivery, and relentless in their pursuit of success. Cayey-bred Puerto Rican artists Raul “Alexis” Ortiz and Joel “Fido” Martinez,” better known as Reggaeton duo Alexis & Fido, have more than earned their “Los Pitbulls” nickname. In less than four years, Alexis & Fido have released four albums and contributed tracks to countless compilation albums, furthering their reputation as major contenders in the genre. Indeed, they’ve gone from talented, under-the-radar performers to bonafide superstars with international selling power that has taken them to Chile and Argentina amongst other Latin American countries. The duo remains a highly marketable name and image, landing film roles, performing at some of the most exclusive Latin music award ceremonies, and scoring endorsement deals with marquis companies.


Table Reservations are available through our