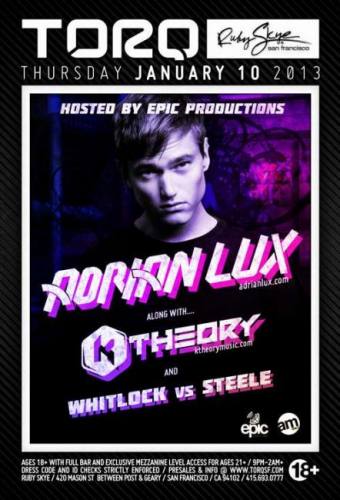 
Similar to his previous singles ‘Strawberry’ and ‘Can’t Sleep,’ Adrian Lux delivers a complete experience on ‘Boy,’ seamlessly transitioning between genres as an anthem of summer love and a more serious track, revealing his growth as a producer.


Exposed to music at a young age, Adrian Lux is the son of two musicians. His professional career in music began as a teenage prodigy, earning fame as one of Stockholm's leading hip-hop & reggae DJs. Though the transition to spacey, sentimental dance pop that Adrian currently creates seems huge, it was a completely natural progression for the young producer.


With one foot in the suburb where he grew up and the other in the pulsating Stockholm nightlife, Adrian Lux meshes his worlds through music. Adrian creates sounds that are often described both as minimal and grandiose. His music built its foundation on the dance floor, with a teenage whimsy attached to it. Blowing up European dance floors for over three years, it’s never mattered what kind of club or crowd that is in attendance - techno, house, or indie; they all adore Adrian Lux.


Adrian has toured the US with Tiësto, and is currently embarked on a 2011 worldwide tour including Ultra Music Festival, Beyond Wonderland, Ibiza, Australia’s Parklife, with dates through Europe, UK, Scandinavia and more.