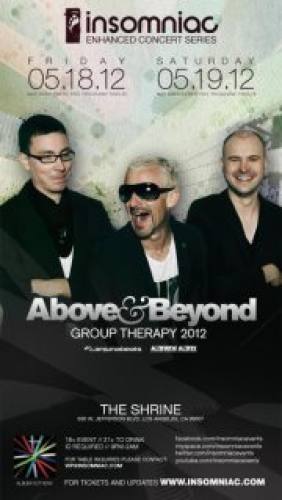 What: Above & Beyond @ The Shrine Auditorium (2 Nights)

Due to the overwhelming response for the Above & Beyond, Group Therapy show at the Shrine in Los Angeles, we have decided to add another show on Saturday, May 19th! After an evaluation, we determined that the show on May 18th would sell out in only a few minutes so this decision was made to accommodate more fans.

In order to give us time to prepare for the second show, tickets for both days will go on sale Monday, March 12th at noon. No tickets will be on sale tomorrow (Wednesday, March 7th) at noon.

Even with this second show, we expect tickets to sell out quickly!

THIS SHOW WILL SELL OUT EXTREMELY QUICKLY

Last May, Above & Beyond came to Los Angeles for two very special Group Therapy nights. The response to both shows was huge, and tickets sold out in record time. It’s been nearly a year since those magical nights and we think the time has come to invite them back for another captivating performance.

On Friday, May 18th, Above & Beyond are returning to the City of Angels for more Group Therapy. This will be Insomniac's biggest Above & Beyond concert yet at the Shrine Auditorium. We expect this show to sell out as quickly as the past events did, so make sure you get your tickets as soon as they are available.