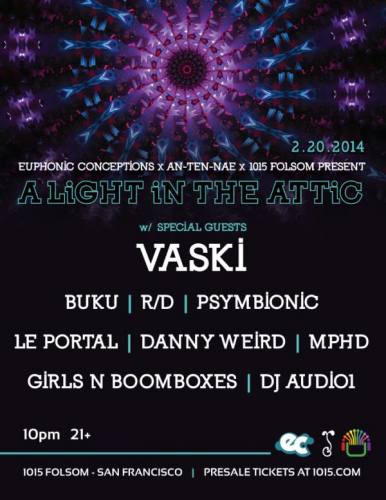 1015 Folsom, an-ten-nae, and Euphonic Conceptions present
A LIGHT IN THE ATTIC


VASKI
VASKI is an American dubstep artist whose remix of Usher’s “Climax” was one of the most blogged about tracks of 2012. With all the buzz about America’s take on dubstep and the EDM crossover, Vaski’s star has been quickly rising, though he is by no means a flash in the pan. The young midwestern prodigy is embarking on the wildest year of his career, beginning in January 2013 he will accompany Excision and Paper Diamond on the EXECUTIONER TOUR, consisting of 50+ shows all across North America. Oh, and did we mention he’s only 22?

Influenced by his earlier genre interests like screamo, metalcore, and hip-hop (what most American teens were into at this time), he recombines these to create a style that the press and general public has eaten up. He began as many EDM youths do, making bedroom beats and figuring out software DIY style. After gaining confidence with his tools and tracks, Vaski went looking for his break the old fashioned way. Vaski was going to community college while working as a bank teller when he finally got a reply on MySpace from Rottun Records saying they wanted to release his work. Ever since then, he’s been either on the road or in the studio.

Starting with this first single, Resonate, each of Vaski’s successive releases have enjoyed healthy chart status (all of them have broken the top 10 on BeatPort dubstep, while a few have gone to #1). His tracks have gotten regular support from headlining household names like Diplo, Rusko, Nero, Kill the Noise, Excision and so on, while his own abilities as a DJ have rivaled some of the aforementioned names.

Vaski’s main objective is to make people move. He has recently incited crowds across three continents and nearly a dozen countries to literally lose control of their bodies. As a DJ, 2012 finds the artist touring Australia and New Zealand again, with a European tour in the works. On the production side, Vaski has several things cooking in the pot, including a tough new single, “Insane,” with vocalist Ava, who has collaborated with Lupe Fiasco and Bassnectar. Coming out this summer on Rottun Records.


BUKU
From the first glimpses of Robert Balotsky’s work as Buku, it was clear that the Pittsburgh native and graduate of Music Technology was onto something. With an effortless grasp on sound design and music theory, the young producer combines deceptively simple and emotive melodies, laden with resounding bass drops and intricate drum patterns. With a love of drums rooting from childhood, his work reflects the obsession – emitting percussive elements only a trained ear could produce.

Behind a kit since age 8, he followed the progression of handling percussion duties for multiple bands throughout his adolescence. Once introduced to digital production, Buku took his techniques to stranger dimensions – and he’s been pushing the boundaries ever since.

His early work has placed him at the forefront of a new wave of rising talent amongst East Coast producers. Garnering interest and plays from Starkey, Lunice, Paper Diamond, Shiftee, Clicks & Whistles, Kastle (to name a few), the up-and-comer has been paving a promising road over the last year.

With his debut release, ‘Slippy’ under the Slit Jockey imprint and a remix of Starkey’s ‘Command’ on Civil Music, Buku is poised to make much larger waves in the coming months: haters beware.
About | Advertise | Contact | FAQs | Terms of Use | Privacy Policy © 2020 - TheUntz.com. All rights reserved.