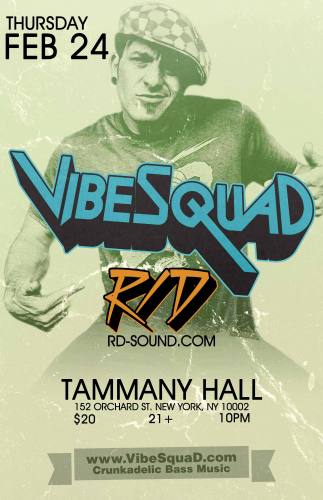 What: A Galaxies of Bass Adventure

A Galaxies of Bass Adventure

with our leaders VibesquaD and R/D


A Thursday night party with Crunkadelic Bass Music by the great VibeSquaD and R/D joined by DJs, VJs and Performers from our community. Let's have some fun and dance our asses off!


A list of PERFORMERS, VJs and OPENING DJs coming soon...


VibeSquaD has the look and feel of a regular humanoid DJ / producer, but as the Crunkadelic Bass Traveler he tours the solar system bumpin’ his signature sound to all the deep space inhabitants. His spaceship leaks beats to the outer edges of the galaxy, leaving a blast of subterranean ill bass in his wake. Creatures are drawn to these sounds, regularly converging in large groups to observe and move to his music.


Taking cues from classic electronic acts like Kraftwerk, The Art of Noise, and Front 242, VibeSquaD incorporates the reliable sounds of Chicago, Detroit, Miami, and the UK, informs it with his background in classic rock, psychedelic jam, and diverse jazz roots, then zaps it all with neon lasers.


The sounds he produces transmit positivity capable of inducing anything from temporary stress relief to outright elation. Tracks from his album Joyful Noise cause a type of heightened euphoria in fans, leading them to shake and bounce uncontrollably and convince their robot and alien friends to voyage thousands of light years just to witness his massive dance parties.


In 1999, R/D and his former DJ partner were invited to help throw a party for the closing of Perry Farrell‘s studio in Venice Beach, CA. They DJ’d for 6 hours, breaking only once for a debut of Perry’s new solo project. Several month’s later, R/D was invited to DJ in the Oasis dome at the very first Coachella music festival. These monumental events drew him straight to Los Angeles and the rest, as they say, is history. He went on to throw scores of parties in L.A., Dj’ing alongside Plaid, Squarepusher, Prefuse 73, Dntel, Jaimie Lidell, Luke Vibert, Nightmares on Wax, LFO, Chris Clark, and many other electronic acts of the early ’00′s.


Eventually R/D started making his own music on borrowed gear, hammering out glitched up IDM and electro on an MPC 2000. Luckily, the first tracks he ever wrote were later released on Andrea Parker‘s UK label ‘Touchin’ Bass‘. As the era of Aphex Twin influenced IDM came to an end, R/D virtually hung up his hat, turning to film sound as a creative outlet. But, his musical nature was re-invigorated in 2007 when he moved in with pals edIT and Ooah, just as the Glitch Mob sound was forming. Feeding off the fresh energy of his incredibly talented roommates, he went back to the drawing board, developing his take on glitch-hop inspired tunes aimed at the dancefloor. His new sound fetched him gigs at Coachella with the Do Lab in 2007 and 2009, and put him on the West Coast festival circuit where he shared bills with Flying Lotus, Pretty Lights, Bassnectar, The Glitch Mob, Les Claypool, Cocoe Rosie, Caspa, Mala, Beats Antique, Mimosa, MartyParty and a laundry list of incredible talent.


Recently, R/D has traded the bleeps and bloops of glitch-hop for pure melody and song structure, and as his music matures, so does his career. In March of 2010, R/D unleashed an un-official remix of Fever Ray‘s ‘I’m Not Done’, which reached #2 on both Hype Machine charts and reaped 20,000 listens in 3 days on SoundCloud alone. So far this year, he has played alongside Krazy Baldhead (Ed Banger), performed at a Bassnectar aftershow with MartyParty and played live for a crowd of more than 2,000 at Coachella 2010 (the Do Lab stage). He’s scheduled to perform live at this year’s ‘Lightning in a Bottle’ festival and he’s currently negotiating a record deal, poised to release several singles and a full length album later this year.