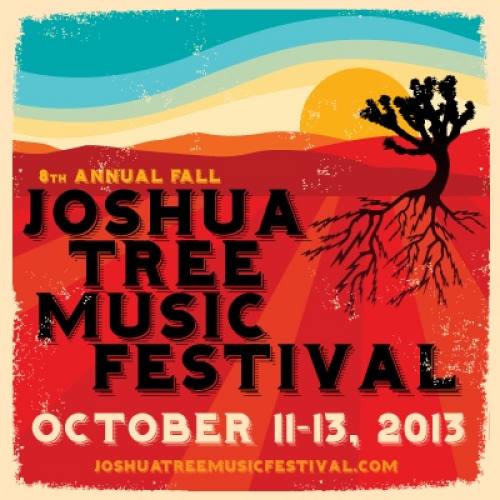 The 8h annual fall Joshua Tree Music Festival (JTMF) is happening October 11 - 13 in Joshua Tree, CA, merging itʼs funky desert style with an internationally acclaimed lineup of potent performers. The three day family friendly festival is a celebration of music in a magical setting. The festival melds the overwhelming spirit of desert freedom with powerful music from around the world to create a lighthearted oasis for music lovers. Magnificent art installations, a robust kidsville schedule, the heavily shaded music bowl, a full spectrum of yoga classes and a global market further inspire, intrigue and invite festival goers. Discover your new favorite band and dozens of new friends in the shadows of the otherworldly Joshua Tree National Park.

About the Joshua Tree Music Festivals:

Founded in 2002 by music enthusiast Barnett English and run on corporate-free, community-centric power, JTMF captures the DIY funkiness of the high desert, turning rusted junk into striking art, old trailers into stages, and a shaded stretch of campground near the infamous national park into a serious dance party. Focusing on up-and-coming artists, the Festival has a penchant for picking about to-break names, from Deer Tick to Trombone Shorty, Edward Sharpe to Brett Dennen, the Avett Brothers to Toubab Krewe sprinkled among diverse music legends such as Robbie Krieger (Doors), Thomas Mapfumo,Bernie Worrell (P-Funk, Talking Heads) and Eric Burdon (Animals).

JTMF is produced by a family of friends and funsters convinced that music is the soul of life, and that art enriches and saves lives. The festival is constructed around one Music Bowl, flanked by two alternating stages. “It’s the combination of the setting, the music, and the people that leads to epiphany moments,” explains English. By design “we’ve created space so that people spend more time together, and you don’t miss any bands.” There is no noise bleed, no white tents, and no yellow-jacketed security details. Instead, there’s instant community and nonstop interaction, as people congregate under billowing shade cloth, moving from stage to stage and catching delicious musical moments. This is an intimate affair splashed with “conversation stopping” golden sunsets over distant rugged mountains and all-night desert walkabouts. The desert is freedom, music is power, and community is crucial. Tap into this magical trifecta and get your JTMF tickets now!