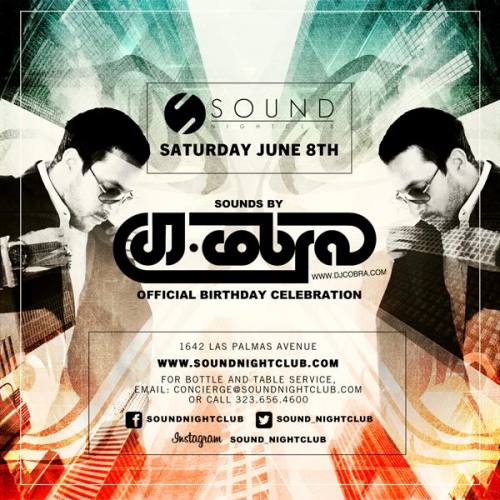 Andrew Bagg, otherwise known as DJ Cobra, is one of the premier open format deejays in the business today. A solid fixture in nightlife, he holds multiple major residencies and spins at the most premier venues throughout the US and Canada. He has also toured, opened for and performed with over fifty gold & platinum recording artists including: Prince, Lady Gaga, Ludacris, Nelly, John Legend and P. Diddy, to name just a few.

In addition to his busy event and club schedule, Cobra continues to push boundaries expanding his reach into other areas of entertainment as well. DJ Cobra toured with culinary great and host of NBC’s “Minute to Win it,” Guy Fieri, in 2010 and returned to the road with him in 2011, for a second straight tour. Cobra was also the featured deejay on Good Morning America’s Oscar Special seen by over 30 million households. He has also made numerous television appearances on shows including Jimmy Kimmel Live, Late Night with Carson Daly and Comics Unleashed.

“As an agency frequently producing high-end celebrity events on behalf of Fortune 500 clientele, HYPE Public Relations has relied heavily on DJ Cobra to deliver the best entertainment to compliment our lavish productions. In addition to having a keen ability to read the crowd and select the most appropriate play list for each occasion, he has an impeccable work ethic which makes him our first choice for all our special events.” – Sam Keywanfar, President, Hype Public Relations, LLC