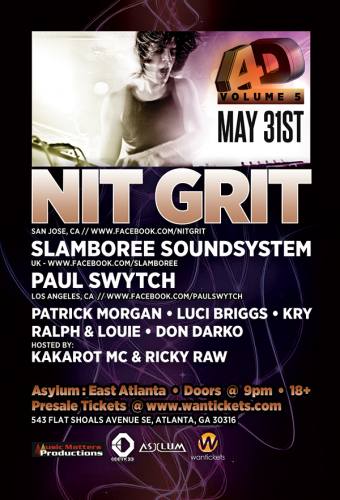 4th Dimension invades East Atlanta for the summer to pair up with Asylum to bring you one hell of a bass line up now every 4th Friday of the Month. There will be Lighting, Dancers, POI and more bass. You will not recognize the venue at all. We have a very limited capacity on this show so get there bright and early.


NiT GriT is the devious machination of 24 year old San Jose, California native, Danny Beall. A relative newcomer to the scene, Dan has rapidly gained a substantial following. Influenced by genres such as IDM, D&B, Glitch, and Breakcore, Dan has spent the past 4 years producing and experimenting under several different monikers. His latest undertaking dissects elements from dubstep, glitch, and grime, and cauterizes them together in the most visceral and precise manner possible.

(First Time Ever In Atlanta)

Slamboree is a live band with a Smörgåsbord of circus performers, daredevils and entertainers. We take each show as it comes, assembling a different crew from our collective for each show and every gig is very different to the last.


The genres bounce around breakbeat, dubstep, drum & bass, dub, techno and electro fused with balkan, folk, and 'gypsy' flavours... all original and all live.

Within this very first year together we've been fortunate enough to perform our live shows at some amazing places such as Glastonbury Festival, Electric Picnic, Boomtown, Shambala, Beatherder, Kendal Calling and the River Thames in London.

(The Return of Hometown Hero with an All new Souund)

Amidst the sea of cookie-cutter regurgitations that reign todays music charts, it is rare to find a sound that truly transcends genre induced barriers & sets fire to the limitations formerly prevalent in electronic bass music. Paul Swytch's debut solo album "Cabin Fever" does precisely that; rising from the ashes with dynamic force as a refreshing reminder that uncharted musical territory still exists to be explored & enjoyed.

A slated 3 day trip to Northern California turned into 3 weeks on a mountain with no reception before migrating back to LA riding the reverberations of a genre-bending & expansive sound. #PsyTRAP

Cabin Fever chronicles & embodies the empowering journey both internal & external, from both geographical & perceived isolation to the realizations of connectivity that coincide with the magic of breaking your own spells that no longer serve you.. the process of becoming "unstuck" so to speak. To pull yourself out & behold the beauty in the universe around you & to be humbled yet activated to create frequencies to be shared with those with the same desire.

Patrick Samuel Morgan is an Atlanta based DJ/producer who is well known for his freshly squeezed tracks and off-the-wall antics on stage. Born on June 9, 1992, this young DJ has been infatuated with EDM for more than half his life; his passion drove him through five years of Allstate Band as well as motivating him to put in countless hours to study the art of musical creation on his own. Patrick produces a wide variety of house music.

Kry is an 18 year old DJ/VJ born and raised in Atlanta, GA. During high school, he was lead vocals in multiple bands, and, after their break-ups and high school graduation, started Djing in early 2012.