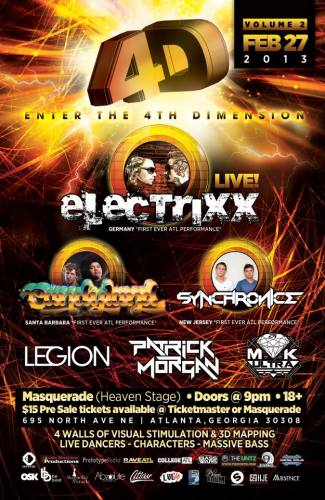 So Atlanta are we ready to take the show experience to the next level? Enter the 4th Dimension a brand new monthly designed to enhance the Dancing Experience to the next level. Headliners and Production for a proper fee as well as a promise of a Great time. To ad more we will be adding live dancers, Characters and all around positive vibes. We encourage all to get the pre sale as we expect these nights to sell out fast.

For the Volume 2 Edition we have stopped at Nothing and wanted to give you some of the best young guns in the game.

Marvin Hell and Erik Venhues aka Microdizko met each other at a ‘run-of-the-mill’ night out in Berlin. They lamented the boring state of events in Germany and decided that, together, they could create an innovative sound and an energetic show. Electrixx was conceived out of Marvin and Erik’s love of Electro Trash, Industrial and EBM infused with their combined influences of club life at that time. In an era of vinyl-only releases, their first pressing "Frequenzstörung" sold out within a week, landing at #2 on the European Club Charts (ECC), Electrixx had arrived! Marvin and Erik never looked back, continuing on their upward trajectory with each and every release such as “Tokyo Rush”, “Just A Freak” and “Cumshot”. They consistently hit the Top Ten of club charts around the world at the time the “Electro House” genre became an integral part of the music industry.

Co-ed duo from Santa Barbara. Ethan and Josie better known as Candyland have been experimenting with dance music and creating originals since April of 2011. Since then they have made official remixes for Bingo Players and Skrillex, and released music on labels like Spinnin', Play Me, and Big Fish. Recently they have created their own label Sweet Shop Records.

Although only 18 and 20 respectively, Synchronice's music speaks volumes about their maturity as producers. The New Jersey based duo began producing two years ago and have already garnered several notable accomplishments, having shared the stage with artists like Dillon Francis, Above and Beyond, Mt. Eden, MiMOSA, Koan Sound, Clockwork, Gemini, Felix Cartal, and Dada Life.

The brother's have proven their ability to produce numerous genres, combining hard electro elements with progressive house melodies, or drum and bass grit with moombahton groove. Their productions have gained the support of Far Too Loud, Mt. Eden, xKore, Dirtyloud, Sean Tyas, Dirtyphonics, Reid Speed, Rogue, Lazy Rich, Helicopter Showdown, Arion, Going Quantum, 3LAU, Dirtyrock, Monolythe, and many more. With this unique and dynamic sound, Synchronice will be a force to reckon with in 2012.

Comprised of Hunter, Advance and Griffin, this American production trio was just recently signed to Matrix & Futurebound's venerable 'Viper Recordings UK ' , Gaining instant support from Pendulum, Ed Rush & Optical and Dieselboy among many others, Legion is one of the U.S. 's fastest rising Dj acts from right here in the south. Following up on the success of their previous collaborative effort with Rnb/Pop singer Adam Wright entitled 'Both Sides' which received mainstream daytime radio airplay by the likes of Pete Tong on BBC Radio 1's Essential Mix series w/ 'Netsky' as well as 'Dj Hype on KissFM, Legion and Adam Wright are back on the grind again and added the precision production skills of young Atlanta producer 'Logam' of 'Subhuman Imprint' to the mix for their haunting vocal piece entitled "House of Cards", Forthcoming on Viper Recordings UK Summer 2012. With a full tour schedule booked through summer and bookings in WMC this year at nearly every popular Dnb event including Dj SS's legendary 'World of Drum and bass' event alongside LTJ Bukem , Crissy Cris Dieselboy and more, Their original tracks and high energy sets are becoming a highly sought after dancefloor commodity.

Patrick Samuel Morgan is an Atlanta based DJ/producer who is well known for his freshly squeezed tracks and off-the-wall antics on stage. Born on June 9, 1992, this young DJ has been infatuated with EDM for more than half his life; his passion drove him through five years of Allstate Band as well as motivating him to put in countless hours to study the art of musical creation on his own. Patrick produces a wide variety of house music. Some of his greatest influences include talented artists such as Tiesto, Armin Van Burren, Mord Fustang, Hypster, Wolfgang Gartner, Jody Wisternoff, and A-Trak. Patrick's tunes are catchy and addictive, but it is his stage presence that makes him stand out from the swarm of other producers and DJs. When he is up on stage his already charismatically energetic personality seems to intensify, resulting in an intense, unforgettable experience that the crowd will surely remember long after the show.

M.K Ultra is a DJ/ Producer based out of Atlanta playing many genres such as dubstep, house, dirty electro, moombaton, and hardstyle. MK Ultra is most known for her very high energy and her very heavy music.Featured in Urban Luxe Magazine's Music Edition as a rising dubstep Producer and DJ. Also Featured in Revoolver Magazine as one of ten "Hottest Females in Dubstep 2012" as chosen by dubstep producer Sluggo. Sponsored by Endorphin Apparel she has been featured on iheartradio and on Prototype radio's show as a rising producer. She has played festivals such as Counterpoint, and Identity Fest, and is working on tracks with Run DMT and Dirty Talk. If you would like to buy an MK Ultra Shirt or Tank you can do so through Endorphin Apparel. 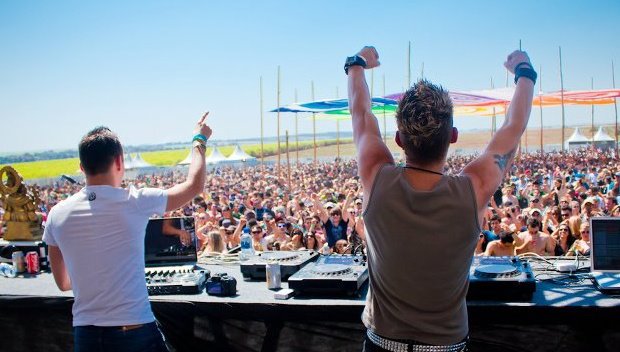