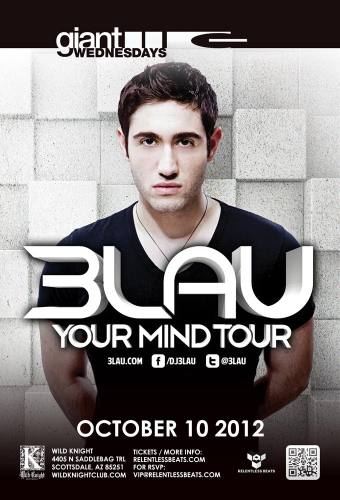 
3LAU is Justin Blau, a 21 year old House/Bootleg/Remix producer from Las Vegas, Nevada. In 2011, 3LAU began producing EDM as a finance major at Washington University in St. Louis, and just a few months later he was traveling across the country every weekend to perform his music. Citing Deadmau5, Steve Angello, Porter Robinson, Avicii, and Calvin Harris as his key influences, 3LAU strives to combine his talents of producing and singing to penetrate an emerging genre, post-progressive house. With critical acclaim from Tiesto, 3LAU's credentials as a fresh face in the game are undeniable, and he will undoubtedly continue to grow among the EDM scene.


Wild Knight is one of the valley’s hottest new clubs located in the heart of Old Town Scottsdale’s entertainment district. This sexy, unique boutique lounge was conceived by world-renown interior designer Mark Zeff and features a state of the art sound system and Vegas style bottle service.