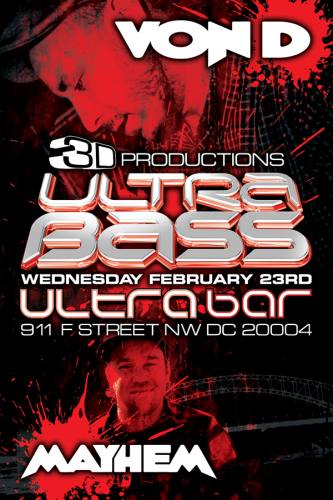 Born into the multi cultural melting pot of the Paris suburbs, a young Von – D found his soul’s conduit in a beat up drum kit. While the riddims of King Tubby fused and morphed into the foetal jungle of Photek, Serge Gainsborg issued instructions from the radio. A fusion chef of bassweight, Von D deftly slices into unpredictable genres, concocting strange and beautiful new forms. After forging a professional path as a sound engineer, Von D has honed his sound sculpting skills to a razor sharp edge. Not content with producing some of the scenes freshest music, Dubstep founders like Skream & Tes La Rok have dropped their own flavor on his music by remixing Von D’s tracks “Show Me” & “Truth” respectively. While BBC’s Gilles Peterson, widely acclaimed as a musical tastemaker around the world has included Von D’s track in this hotly anticipated compilation albums, and three time DMC World Champion and one of the worlds hottest hip-hop DJ's, DJ Craze has been supporting Von D, including Von D's "Show Me" in his latest mix. With no sign of slowing down, Von D’s immense production has seen his music picked up by the dubstep scene’s number one artist Skream, securing a Von D release for his label Disfigured Dubs, DJ Chef also released Von D’s “Show Me” featuring Phephe on his Sub Freq imprint, going on to be one of the most talked about releases of 2009 and with hugely popular releases on Black Acre and Argon, we can also expect one of the most hotly tipped Albums of 2011, forthcoming on Argon records. Far from the shy studio type, Von D has also created a global buzz with his numerous explosive live performances featuring unreleased and exciting material from Von D as well as other established top producers. From touring the United States or though out Europe, Von D has also reached as far flung as China with New Zealand and Australia also in his sights. Whether his music is either on wax in your room or played out by the artist in front of you, Von D is an act not to be missed, Von D rocking a dancehall near you soon.

Chart topping, dance floor rocking, and taste making come naturally to Atlanta based producer, DJ, label executive and promoter Mayhem. With over 15 years in the studio and 10 on the decks, he has garnished the attention of the heavyweights in every genre of his focus. Rooted heavily in Drum & Bass music, and with a discerning ear, 27 year old Mayhem found himself making big moves from an early age. From releasing records for Andy C, TeeBee, Dieselboy, Noisia, and Black Sun Empire to DJing across the world for massive crowds in Japan, Australia, New Zealand, Europe and beyond; he has warranted a reputation for diversity and quality control. Collaborating with and developing artists such as Noisia, Le Castle Vania, Phace, Evol Intent, Sinthetix, Gein and Gridlok amongst many others, his production soared to new heights with "Exodus (featuring the legendary KRS-1)", "Moonway Renegade", and "Choke" with Noisia. Boundless inspiration pushed Mayhem to pursue Dubstep in it's formidable years, immediately signing with the reputable Subway Records, as well as Indie/Electro under the moniker Rrrump. As of late his focus has been brought back to home on the forefront a movement combining southern Rap music with Dubstep collaborating with long time friend DJ MEGANFOXXX of Heroes + Villains. His monthly parties Fuck Yesss, Heavy, Tambor Y Bajo, Atlanta Dubstep and Haute Mess have helped reshape Atlanta's nightlife. No matter the genre, you are guaranteed a diverse set with attention to detail and a healthy respect for dynamics and balance. This is Mayhem.

Featuring 2 Rooms of Music with Local Support From:

Lots Of Parking All Around The Club!!!